News reaches us that the former Spireite Gerry Burrell passed away in Belfast on October 25th, at the age of 90. 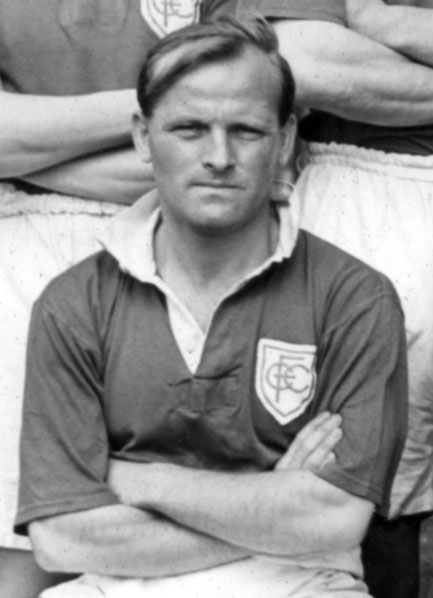 Belfast-born, Gerry was a schoolboy international and served his time as an electrician at Harland & Wolff while playing after the second world war with a Belfast Celtic side that has assumed almost legendary proportions. He crossed the water in 1947 to join St. Mirren after The Saints' manager had journeyed to Belfast to watch another player but was impressed by Gerry's performance in that game. He established himself with the Scottish side, playing 90 times and scoring 26 goals before moving to Dundee in 1951. Three successful years at Dens Park brought a move to English football and Huddersfield Town, for whom he made 59 appearances in three seasons.

Gerry joined Chesterfield in 1956 for a fee quoted at £1,150. At 5'3" Gerry was on the small side, even for a traditional 'winger, relying on speed, poise and ball control to carry him to the by-line and deliver a cross. He formed an effective partnership with Bryan Frear and supplied many crosses for Bill Sowden to feast on. He suffered spells absent through injury, however, and when the time came to review contracts for the 1958-9 season it was decided to free Gerry and place the club's trust in the emerging Andy MacCabe. Gerry played 51 Football League games for Chesterfield, scoring four goals.

Gerry returned to Northern Ireland to play for Portadown. After playing retirement he remained in the game as a scout, spotting talent for Linfield beyond the age of 86! Speaking of his involvement in the game, Gerry said that “I don’t do it for the money, I do it because football is my passion and I still think it is the greatest game on earth.” A fitting epitaph for one of Northern Ireland football's greatest servants.