I'm indebted to Andrew Foster, grandson of our former player Joe Ball, for sending me a copy of his contract with the Chesterfield Town club, from the 1905-6 season. Joe joined us from Clowne White Star in 1903 and was sold to Bury for what might have been a British transfer record of £400 in December of that year. The fee is confirmed in Bury's minute books. Wiki suggests here that Alf Common's move to Sheffield United in October 1901 set The Cutlers back £325, and Common was the subject of the first £500 transfer, in 1905. Information on those inbetween is a little hard to collate and make sense of.

Ball came back from Bury in august 1905 for what was reported to be the same fee as what we'd sold him for. Given the Town club's long and increasingly forlorn struggle against poor finances I find that a tad hard to believe, but they did just have £340 burning a hole in their pockets from the sale of Sam Hardy so, who knows?

Ball went on to play for Denaby United, Worksop Town and Mansfield Town, but died during the great 'flu pandemic on November 23rd, 1919, at the age of only 36. 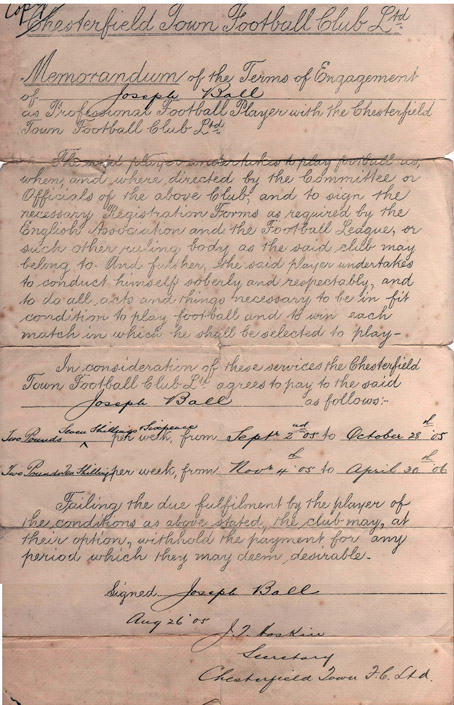